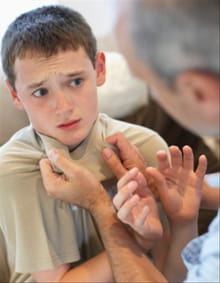 The invoice additionally seeks to ban the pulling of a child’s hair, shaking, twisting of joints, reducing or piercing the pores and skin, dragging or throwing a toddler and to perform physically painful or damaging acts corresponding to squatting, standing or sitting in a contorted position, holding weight or weights for an extended interval, kneeling on stones, salt or pebbles in addition to verbal abuse or assaults, together with intimidation or menace or bodily harm, swearing or cursing, ridiculing or denigrating a baby or making him look foolish in front of his peers or the public.

The measure, Senate Bill No. 1477, often known as an Act of Selling Optimistic and Nonviolent Self-discipline of Children, seeks to guard youngsters from all forms of physical and mental violence by prohibiting beating, kicking, slapping, lashing on any part of a kid’s body, with or without using an instrument reminiscent of broom, cane, whip or belt.

In subsequent free-play periods, those that had obtained rewards for their artwork step by step grew to become less fascinated by drawing, and when they did draw, they spent less time on their artwork than the children who hadn’t received rewards.